In this article, I will talk about the possible security risks of serverless computing and how to mitigate them.

More simply, a cloud provider isn’t accountable for many things you do on the cloud. For example, it doesn’t make sense for a cloud provider to be accountable for a security breach in a software package on a virtual machine you installed. It’s important to note that the shared responsibility model is not the same for every service. When we go higher in the stack of abstractions, from IaaS to PaaS or SaaS, the model shifts. Looking at the previous example, when using Amazon ECS Fargate, it doesn’t make sense to hold you accountable for a security breach for packages installed on the virtual machine that hosts our container instance. (under the hood talk)

Let’s look at the shared responsibility model in action and compare the AWS ECS/EC2 with the Fargate variant.

In the diagram below, you can see AWS is responsible for the Physical Hardware, foundational services, and the ECS control plane of both variants. But note that the underlying virtual machine that hosts your container instances on ECS/EC2 is the full responsibility of the customer, even though AWS provides you a one-click solutions to manage them. This means if anything happens, you are responsible! That is why you should ensure that VM is well protected and continuously verify it says that way. That responsibility is in contrast to the Fargate variant, where the worker node is the complete responsibility of AWS. 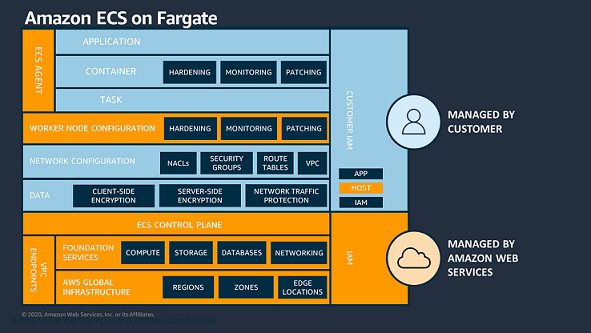 From The ECS Shared Responsibility Model

Let’s apply this theory and start with the fun part. The lambda function below takes a name from a query parameter and renders it in a “Hello World” template using Jinja2.

Can you spot the issue?

The issue is in the line where I am rendering the Hello template.

You shouldn’t substitute variables inside the template but give the render function a name parameter and reference that using mustache.

You may have noticed this exploit is almost the same as SQL injection, which can be mitigated by parameterizing the SQL query and passing the variable as a parameter instead of using the variable directly. This is why the exploit is called Server-Side Template Injection (SSTI). Let’s try exploiting this vulnerability 😉

First, we use a valid parameter, like “world” to get an expected outcome:

jinja2 now interpreted our input instead of printing it. 😱

In short, you start from a Python string, call the class and then call its base class to get all imported classes. Then you take the 187th class (this number can differ, and there are other possibilities). You take this number because it imports the sys module, and the sys module imports the os module. Using the os module a lot is possible. For example, you could use it to interact with the filesystem to spawn processes. Below it’s used to execute the printenv command and print the output.

Next, let’s figure out the possible impact of this SSTI.

First, as shown in the print screen above, the environment variables always include credentials. This is because the account id and secret of the lambda execution role are injected as environment variables into the function runtime. If you require the lambda function to access AWS DynamoDB and you, therefore, grant the lambda role full access on this DynamoDB, a malicious user can use those credentials to acquire full access to your data store.

Lastly, if the Lambda function is connected to a VPC, an attacker can attempt to scan the internal VPC, Peered VPCs, VPCs routed through Transit Gateway or the on-premise network connected with a DirectConnect. It’s even possible to scan an S2S VPN if the access control lists aren’t strict enough. Acting this way, an attacker can look for other vulnerabilities and make lateral movements in the network.

Looking for counter measurements, we need to look at the shared responsibility model of AWS Lambda.

From The Shared Lambda Responsibility Model

The model state you as a customer are responsible for:

Based on this information, we will explain the countermeasures of each topic.

To protect a function, you can use static application security testing (SAST). SAST tools scan your code locally, in git, or in a build pipeline. The tool searches and notifies when specific patterns of prevalent bugs are found in your code. The advantage of this approach is the ease of implementation and performance. On the downside, there have to be rules defined.

Another possibility is to integrate runtime security for your AWS Lambda. An agent to do this runs actively in the same runtime of AWS, monitoring all application actions. Most of these tools will detect or block a remote code execution exploit and likely have features like detection/blocking malicious file uploads or malicious payloads.

Another critical topic is securing Lambda function configuration. To be more precise, securing the configuration of networking options: traffic allowed to reach your function or a VPC integration enabling a function to reach other servers/services via a private network.

If a function is publicly exposed, limiting the allowed IPs to your function will make it harder to abuse a function. If function access is limited to a VPC, it is safer to use VPC endpoints and disable all public traffic to the function. This will make it impossible to exploit a function unless another VPC entrypoint is discovered.

For the egress traffic of the Lambda function, I advise making the access lists as strict as possible so that only the necessary traffic is allowed.

The last and most important topic is IAM. You have two options to configure IAM: the resource policy and the execution role.

A resource policy validates the IAM role that tries to invoke the lambda function. If you would define the AWS principal as a wildcard, any AWS role can be used to invoke the function from any AWS account. So again, make the resource policy as strict as possible, and don’t hesitate to use conditions.

The other policy you can define is the lambda execution role. A function assumes this role to access other AWS services like DynamoDB and other functions. Try to make this policy as verbose as possible and avoid wildcards.

As shown in this post, exploiting vulnerable Lambda functions or other serverless services is possible and can have a significant impact on organizations. Be aware of what you are responsible for by checking the shared responsibility model and try to cover each vector with at least one but preferable multiple security measurements. The more security layers you use, the more protected you are, and the less damage can be done.